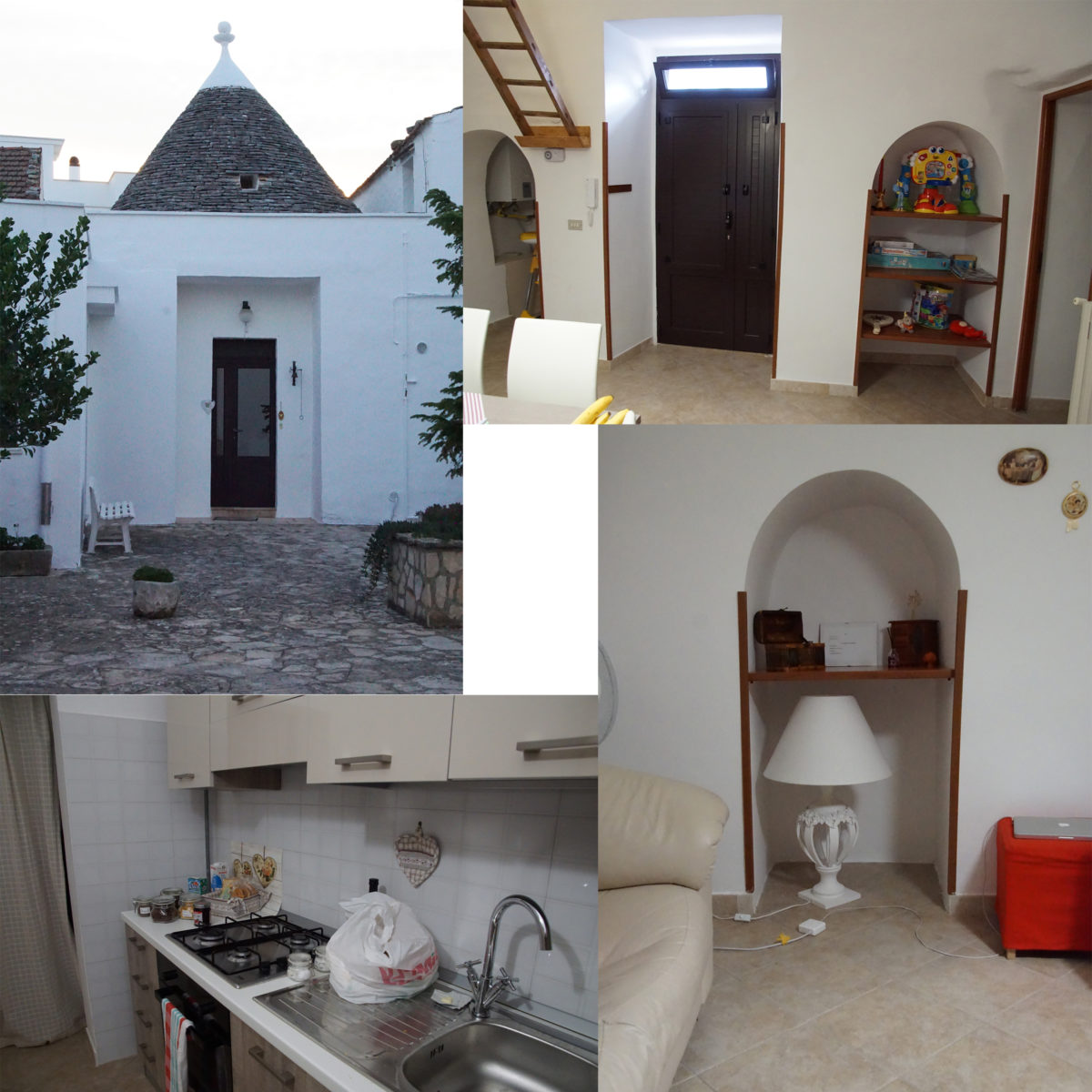 The trulli are pretty fascinating in their own right, and since our visit to Alberobello followed so closely after our stay in Matera, in a curious way the trulli emphasize contrasts with what we saw in the sassi there. More on that contrast later.

As I mentioned in my last post, trulli are a traditional type of structure particularly common in Puglia, the region that includes Alberobello and Bari. This is an area in which agriculture is king: poised between the Apennines and the sea on Italy’s southeastern coast, Puglia is covered with farms, particularly olive groves (40% of Italy’s production), vineyards, and cherry orchards.

Evidently the soil was incredibly rocky. The first crop these lands produced must have been limestone: everywhere you look you see stone fences dividing up plots of land, and the main material used for making these unusual buildings is stone.

Hundreds of years ago, the residents developed this style of building, which builds the walls with boulders from the fields and makes the roof from flat limestone slabs. The whole structure is made without mortar or cement, and it uses a double-walled construction with a rubble-filled space between the walls and roof layers.

My guess is that the walls and roof were leakproof, mostly, and leaks arising from occasional extreme weather wouldn’t ruin a simple stone inner wall. Our place, though, is plastered on the inside, and so it may have some nontraditional sealant to make it completely leafproof. A little research online tells me that there are some conflicts between residents and historical groups over what constitutes authentic trullo structure, and our place may be in the middle of that; but this is still unmistakably a trullo.

The entry door opens into a spacious central room, and above the room is a finished ceiling with a hatch. A ladder–conveniently placed off the floor on a shelf–provides relatively easy access to the attic above. As expected, the walls are quite thick; running modern electrical outlets and plumbing must be a challenge.

Besides the main entrance, this main room has three doorways. One opens onto a well-equipped galley kitchen, and two others onto bedrooms. A third bedroom is accessed through the kitchen, and the single well-equipped bathroom (both a tub and a shower!) is accessed through one of the other bedrooms, which happens to be mine. Other travelers in our group apologized needlessly for their nighttime bathroom breaks in advance, but I assured them that I could sleep through any interruptions, and I did.

So two consecutive residences–in Matera and Alberobello–were in unmodern housing. But the two places were very different. In Matera, we stayed in a converted cave dwelling, which could be enlarged and modernized as the owners desired and had the means. In Alberobello we stayed in a building reflecting the traditions under which it had originally been built.

From their beginnings millennia ago, the sassi of Matera were minimal, basic shelter for very poor people, and they were cleared in the 1950s by government order because the combination of overcrowding and extreme poverty made them unhealthy, unlivable residences. Now they’re being gentrified at considerable expense. The trulli of Puglia are traditional, but they don’t have to overcome the sort of sad history faced by the sassi.

Today’s photo: I’ve been sticking to my plan of publishing one photo a day; but for today’s photo, I cheated by making a collage of four photos showing our trullo, clockwise starting from upper left. 1) An exterior view from the front. 2) The entryway from the inside; the ladder for access to the cone rests on a shelf on the wall, to be put on the ground when needed. 3) A nook in the main living space; the thick walls allow extensive use of recesses for storage or display. 4) Part of the kitchen; the curtained entry to one of the bedrooms is on the left.