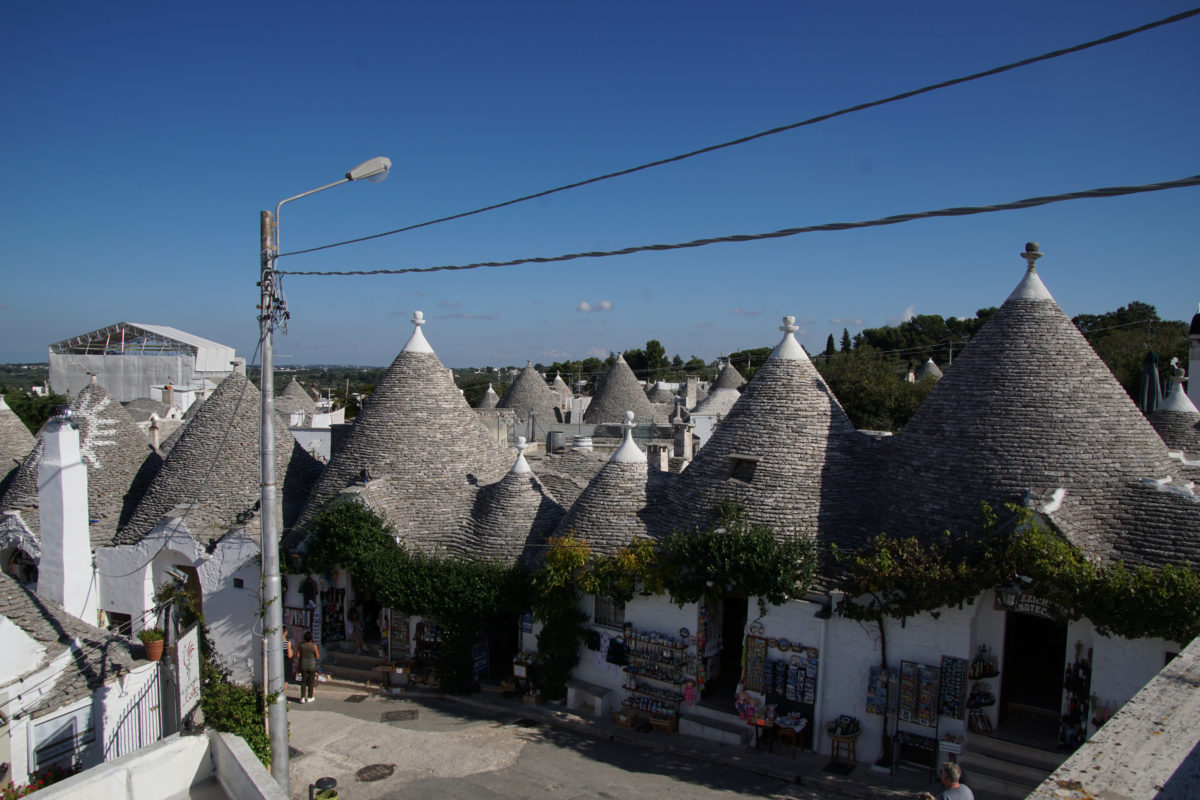 It’s about an hour’s drive from Matera to Alberobello. Since we had about five hours between check-out and check-in, after checking out we went into downtown Matera and saw a movie about the Sassi that we had missed yesterday. Yesterday we toured the town and a cave dwelling, but the movie helped put it all into perspective, and I think we understand the situation better now.

For me at least, I understand better the distinction between Matera and the Sassi. Matera is the town, a town big enough to serve as the capital of the province of Matera. The Sassi are two neighborhoods of cave dwellings, making up the “old city.” Our lodgings there were in Le Stelle nei Sassi, a cave dwelling converted into a B and B located in the Sasso Caveoso. This old section is the part that serves so well as a movie set, because of the jumbled patterns of its roads, walkways, stairways, and alleys. The streets in many places are built right on the roofs of cave dwellings below!

Tonight we’ve relocated to the Puglia region (also called Apulia), which forms the heel of Italy’s boot. While Matera’s Sassi are made particularly poignant by issues of social justice and governmental intervention, the trulli are simply traditionally different. Trulli are stone huts common in the Puglia region, with walls made from locally-gathered stones and cone-shaped roofs constructed of limestone slabs. The buildings are built with what’s called a dry-stone technique, meaning that there’s no mortar or cement. The Pugliesi have been building these things since the fourteenth century, and we’re staying in one!

We are about an hour from the port city of Bari, and that’s where I catch my flight back to Milan tomorrow. Judy, Lew, John, and Elaine will move on even further south, to Sicily for two weeks. But tomorrow night I’ll be back at the Ascot Hotel, where I stayed on September 21, and on Friday I’ll be flying back home from Milan. So for me, this trip is nearly over.

But maybe not the blog! Past travel has taught me that there are comments to be made after the trip is over. Those comments are likely to incorporate more general observations, and this time I expect to add some of the nearly 900 pictures I’ve taken. I know I’ll return to a busy schedule, with plenty of appointments and commitments already waiting for me back home. So I don’t know exactly when I’ll finish the other records of this trip, but I’m sure I will. For those who have followed along and shared their comments and encouragement, thanks!

Today’s photo: This is a view from the National Park Trulli in Alberobello. There are thousands of these trulli, and they’re used for everything: storage huts, houses, businesses, even churches! And we’re staying in one tonight.