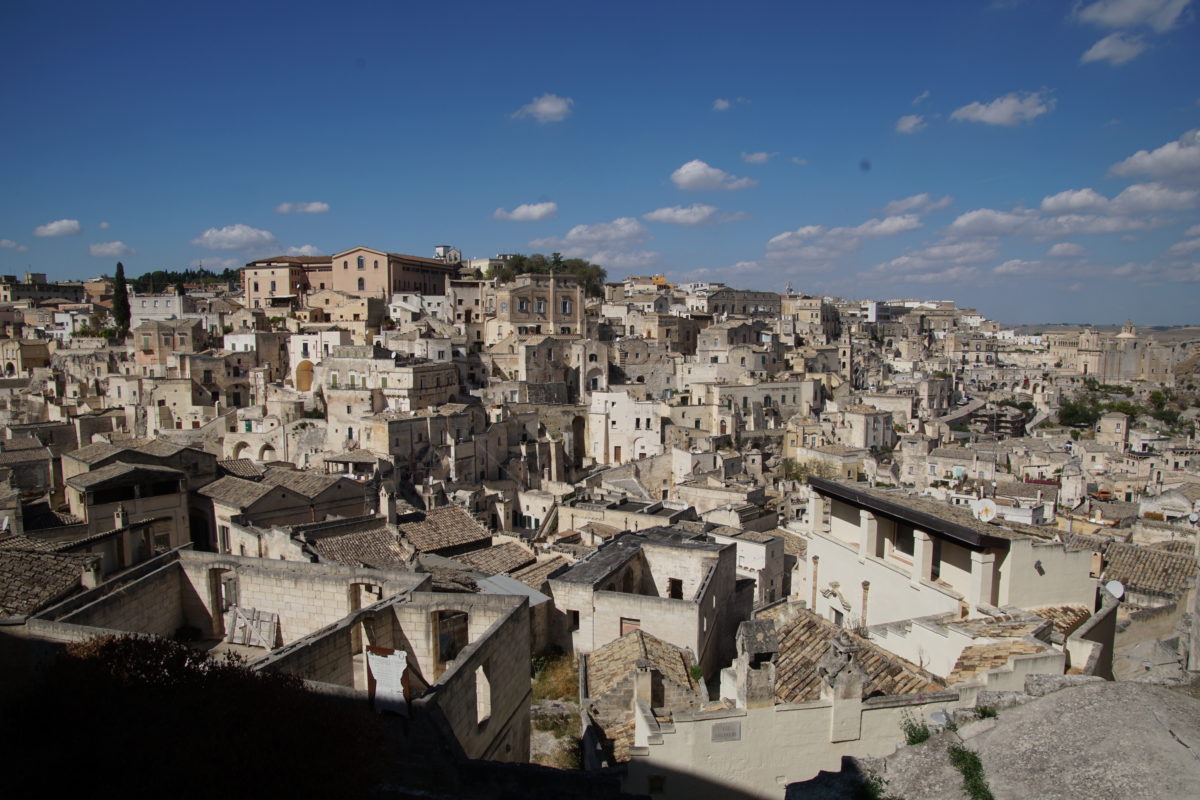 We spent today exploring the city of Matera, which is something of a study in contrasts.

On the one hand, Matera may be the most “touristy” place we’ve visited on this trip: relatively few people live here, but it’s crowded with visitors drawn by its interesting history. That history is fascinating.

Matera is one of the world’s most ancient continuously-inhabited cities. For thousands of years, most of its inhabitants lived in cave dwellings cut into the rock of the local cliffs.

We’re staying in a converted cave for a couple of nights here, and it makes a remarkably nice living quarters today. It’s quite a contrast from when the town was built.

For centuries, residents lived in circumstances that we would not tolerate today: water running through channels from cave to cave, animals housed with the families, no sanitation facilities to speak of. It was basically a subterranean city. There were some relatively prosperous times, but generally the inhabitants lived in extreme poverty. In the fifties, the government decided that the living conditions here were an embarrassment to a modern country, and they moved the inhabitants into public housing–by force when necessary.

Since then, some of the caves have been renovated for modern dwellings (although it appears that most of the renovated caves are being used, like ours, for vacation lodgings rather than private residences). We took a guided tour of a preserved cave, the Casa Sisterno, which contains a centuries-old cistern and demonstrates just how claustrophobic these places must have been.

Many of the caves now have fronts with modern doors and windows. Many house shops and restaurants. But the place retains its ancient character: it’s a jumble of streets and alleys on multiple levels, with staircases connecting them. It’s the first place I’ve been to where GPS systems have a hard time giving three-dimensional directions. Because it looks so primitive, this place has been used for movie sets: The Passion of the Christ was shot here, as was a new James Bond movie coming out in April, No Time to Die.

We’re leaving tomorrow for yet another unusual style of housing: the trulli of Alberobella. I thought that a night or two in the sassi would be enough and this would be a one-off visit, but we’re finding it fascinating, and it’s possible that we will return sometime.

Today’s photo: Behind all these facades are caves cut into the rock on this side of the Gravina River valley. You can barely see the alleyways, stairways, and roads connecting the parts; but they’re there, and they make navigation interesting.

One thought on “Cave Dwellers”