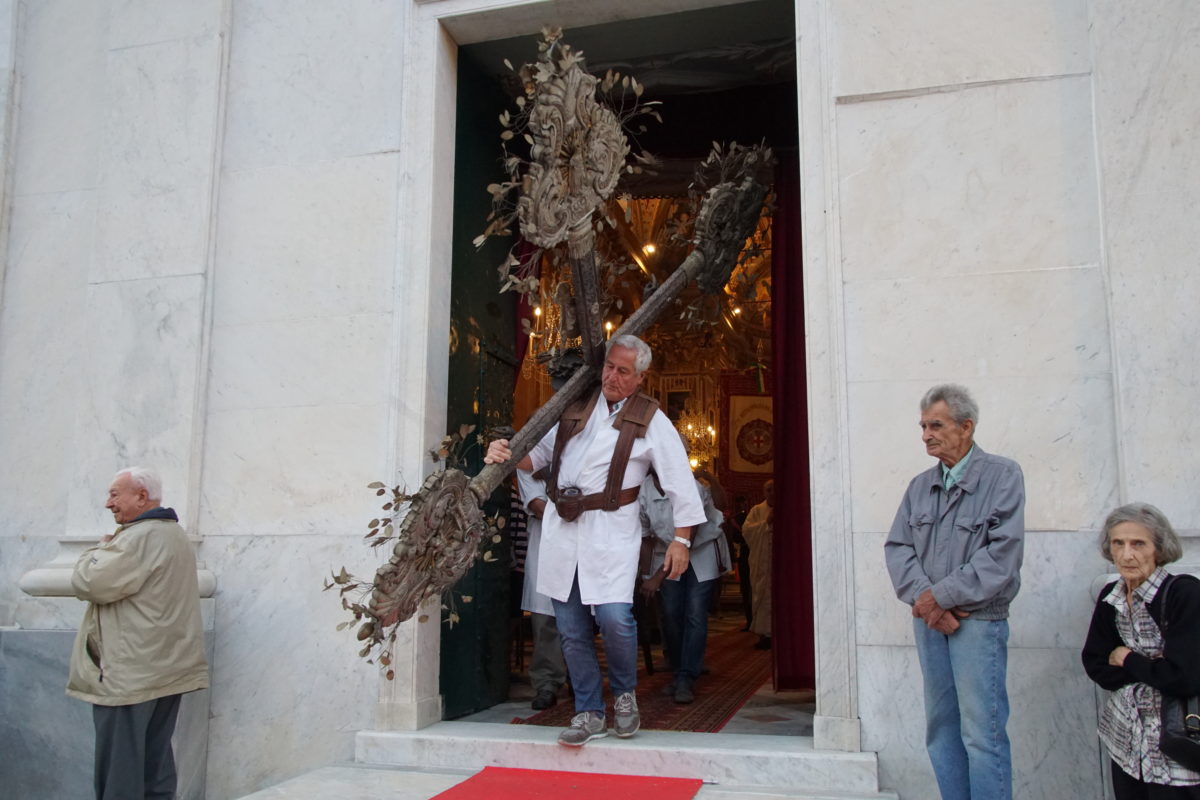 I’ve been home now for three weeks and I keep running into people who say they enjoyed my blog posts while we were away in Italy. Enough is enough, I say, and it’s time for me to move on; but there’s a topic that perhaps deserves a bit more exploration, and that’s the feast that served as the centerpiece of our trip.

In case you missed it, our trip was organized around the date of September 29, which in some denominations is Michaelmas, the Feast of St. Michael, in others the Feast of the Archangels. (There’s a whole history there which you may find interesting; an internet search will keep you busy for hours.)

Our great-great-great-grandmother and -grandfather were baptized in churches in the tiny northern Italian frazioni of Romaggi and Soglio, respectively; each place has its own Chiesa di San Michele–a Church of St. Michael. Soglio is the larger town, and its church seems to have the more-established festa, always held on September 29 itself. This year, the feast occurred on a Sunday, which seemed to be the ideal opportunity for us to visit. Sister Judy, her husband Lew, cousin John, and his wife Elaine have attended the feast in the past; it was new for son Rob and his wife Elizabeth, and for me.

People whom I have known only for the past decade or so might assume that the Soglio feast is right up my alley, but longer acquaintances are probably surprised to learn that I would be traveling so far for this event. That’s because the Soglio feast brings together two areas of personal conflict for me: Italianness and Catholicism.

Northwest Side Chicago Italians, sort of

In organizational meetings I have sometimes jokingly posed for effect as “an Italian from Chicago,” but the fact is that while that is at least partially true, it’s a gross simplification. Like most of us, my cultural background is complicated.

I am the youngest of four siblings. Our maternal grandfather died before any of us were born. Our other three grandparents all lived until I was a toddler; so my siblings knew them, and I didn’t. Our father died a few years later, when I was five. Due to unfortunate circumstances that don’t need to be discussed here, our contact with our father’s side of the family pretty much ended after his death. While my siblings had known the Italian side of the family, I have no significant recollections of them.

The four of us I were born between 1939 and 1949, only a generation after the Roaring Twenties gave Chicago Italians something of a bad name. And for several of those years, Americans and Italians had fought each other in World War II. Altogether, then, it seemed that the main business of the Italians I knew wasn’t celebrating our heritage but overcoming it. Among my young friends and acquaintances, the goal (as it tends to be for all young people) was to fit in.

But this had actually started much earlier. When my great-great-grandfather Giovanni Lavezzi and his siblings arrived on these shores around 1870, assimilation was a life skill. Evidently one of the first things they did was to anglicize their names: Giovanni became John, Giuseppe became Joe, Humberto became Bert, and so on. We have no record in which Giovanni used “Giovanni” as his first name: it was always “John.” By the time I came along (admittedly, a long time later), nobody was using the Italian pronunciation of our surname (where the “zz” is sounded as in “pizza”).

The Montclare neighborhood we grew up in in Chicago was some distance from the traditional family neighborhood of Logan Square, and even further from Chicago’s older Little Italy on the south side. The distance may have been as much cultural as physical. The area was an ethnic melting pot, with the parish church offering confessions in multiple languages. It was one of those places where, it is sometimes said, there were two religions: Catholic and Public.

Part of our job as children was to transcend nationality. The parish school focused on our common Americanness and encouraged a strong patriotism, perhaps intended partly to demonstrate that we were at least a patriotic as the Publics. My childhood friends were of many ancestries, but I don’t recall ethnicity being something we talked about. I don’t remember hearing ethnic jokes until high school, and even then I recall thinking of them as a somewhat unsavory novelty.

Ethnicity on our mother’s side was more straightforward: they were Protestants, mostly from the British Isles, with at least one German connection (perhaps including an Ashkenazi). Some of them came to these shores as far back as the 1600s, and by the time our mother came along, they generally described themselves with the wildly imprecise term of “Scotch-Irish.” (The story of our being raised Catholic by our Methodist mother is interesting, but best left for another essay.)

Our maternal WASP heritage was familiar, and we had regular contact with that side of the family; our father’s heritage was unknown, mysterious, even exotic. I didn’t become interested in this Italian thing until many years later: who the ancestors were, where they came from, and who our relatives are on that side. By this time, visiting the churches where Costantino Lavezzo and Maria Raggio, my great-great-great-grandfather and -grandmother, were baptized and married, is deeply powerful, and I wasn’t going to miss the opportunity.

I don’t recall our Chicago home parish having any feast celebrations of the ethnic sort that I see in (for example) Cleveland’s Little Italy. The most ceremonial observance I can remember was Confirmation, where we marched between phalanxes of saber-bearing senior Knights of Columbus in full regalia. But Confirmation isn’t ethnic, while some feast days are; and ethnic celebrations might have been problematic in a polyglot parish. Plus, ethnics of our brand weren’t interested in anything old-country.

I’m not particularly pious, but I have always been interested in religion, and especially in religious observance. At eight, my Franciscan summer camp drafted me to play the little reed organ for weekday Masses in the camp chapel. In sixth and seventh grades, I was a Mass server (although a scatterbrained, distracted, daydreaming one). For about eight years after that, I was certain I would be a priest (or a Playboy photographer; I was conflicted). I sang in the choir at a Reform temple for a couple of years in college. When my high school chorus and college glee club sang at services, I accompanied them on the piano or organ. When my friends married, I was frequently asked to be their organist. And starting in my early thirties, I began to serve as a musician for the parishes where I’ve belonged and a few where I haven’t. When I attend a wedding or a funeral–particularly in another faith tradition–I’m taking notes on their rituals.

But as much as I have been interested in liturgy, I’ve had a tendency to think condescendingly of the Feast celebrations (whether St. Michael’s in Soglio or Assumption in Cleveland’s Little Italy) as picturesque and quaint, but not particularly meaningful. They seemed old-fashioned, part of a faith tradition that wasn’t mine. They belonged to an ethnic culture to which I had little connection. So my attending the Festa di San Michele in Soglio was a departure for me in both a cultural and a religious sense.

I’ve begun to think more broadly about religious devotions, including feast processions. Sure, where I grew up we didn’t parade with saints around the streets of the parish, but we did enjoy the parish carnival, and it was an important part of parish life. Maybe carnivals, church suppers, fish frys, parish picnics, live nativities, and feast processions–even, God help us, the dreaded church bingo–are all ways of belonging, and I should just get over myself.

And so I looked forward to our trip to Soglio, and I must say I had a great time at the Festa. For days before the feast itself, the bells and carillon of San Michele a Soglio rang out several times an hour, calling the whole valley to the feast, and they would be answered by the bells of the neighboring parishes.

At the appointed time on the Feast itself, we began the Mass, with about eighty inside and double that outside. (There was no language barrier there, because–one of the benefits of a universal Church–I could participate softly in English.) After Communion, we joined those outside, and we all followed the Santo of St. Michael and an enormous crucifix (click here for a video of its repositioning) a spot above the cimitero where we prayed for the dead, and we returned to finish the Mass, and then there were fireworks, and music, and dancing, and food and wine.

I myself can do without dancing, but three out of four was pretty good, I thought. It turns out that with a little focaccia and vino, I can pass for an old-country Italian Catholic.

As a college student, I pursued a double major in English and psychology; I taught both subjects, and they remain powerful interests today. Psychology offers tools to understand ourselves and others; writing and literature–including theatre–express and share our views of those understandings.

After graduation, I started my teaching career in a school with many black students. Our mother had raised us with good attitudes toward race, but our neighborhood offered relatively little exposure to nonwhite cultures. My core takeaway from that early teaching experience was that what we have in common is much more important than our differences. In race and ethnicity, in religion, and in politics, that belief has become a central value in my life. In our travels we met people who are in many ways different from ourselves; but those differences prove to be accidental and relatively insignificant.

When we explore our roots it’s not because one culture is better or worse than any other, but because the exploration helps us to better understand ourselves. Two centuries ago, our father’s ancestors probably celebrated the Festa di San Michele in much the same way that we did just a few weeks ago, and perhaps in this year’s procession, their spirits walked with us.