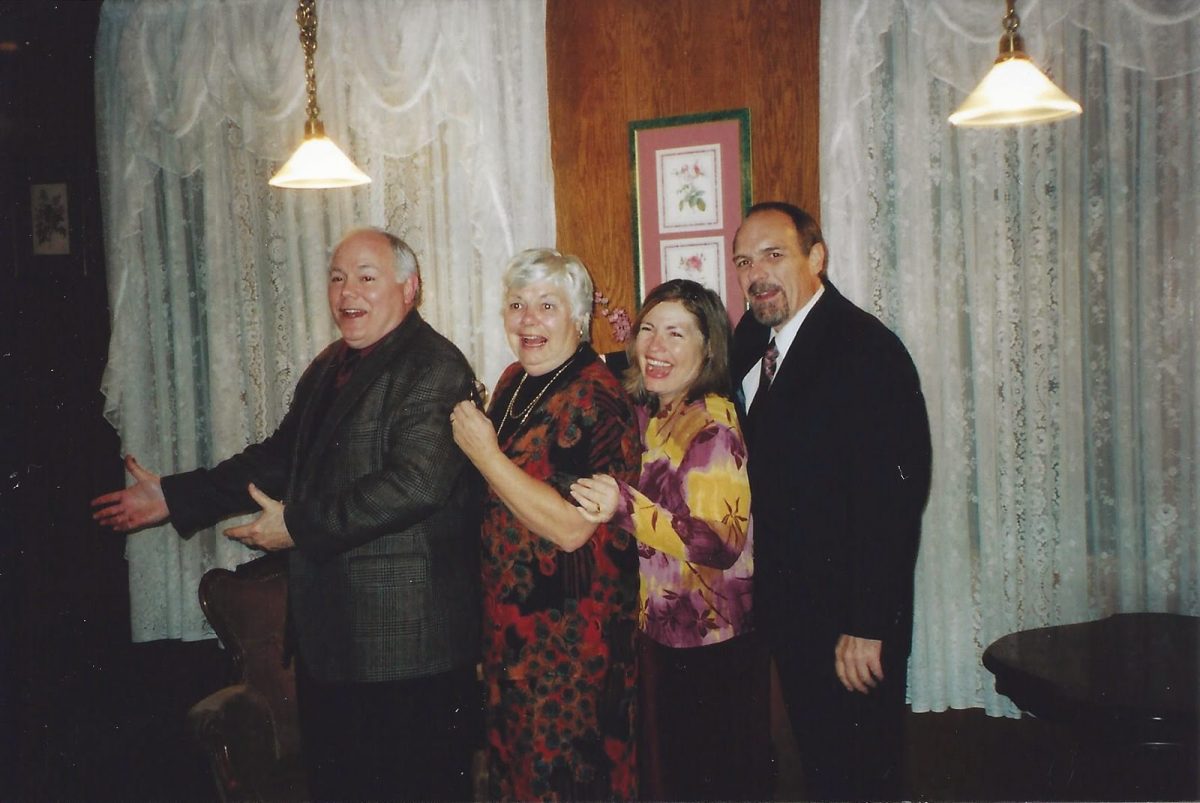 My eldest sister, Jane Gallegos, passed away last month, and until now I have been quiet about it–uncharacteristically so, I suppose. I’ve just returned from her memorial service in Denver, where I had a chance to say something to our friends and family assembled there. Here are some thoughts I shared at the memorial.

We called her “Sarge”: not because we were a military family, but because the image of a sergeant fitted her personality: the ability to lead, the desire to guide, the willingness, if that’s what it took, to be seen as “bossy.”

Jane was fond of saying that when I was born she was sure that our parents made me just for her. But I only heard that much later, and it may be revisionist history, since I certainly didn’t get that impression when we were younger. She figures in my very first memory. We were in the kitchen of our house on Rutherford Avenue, me in a high chair. I asked, “Can me have some milk?” and my sisters, always ready to improve me, corrected me and withheld the milk until I said, “May I have some milk?” Just so are future English teachers made.

The difference in our ages is almost the same as the difference between my age and that of Jane’s daughter Debbie. I remember receiving a letter at camp announcing that I was now an uncle. I, who had never had a little brother or sister, now had a niece! And over the next few years, I spent the non-camp parts of several summers with Jane and Debbie. I suppose that it was as Debbie’s babysitter that I learned my first lessons in responsibility, lessons to be practiced later babysitting so many other nephews and nieces. Taking care of them was important to my own development, and none more important than that first one, little Debbie.

Almost everyone who knows any of us knows that we grew up in an unconventional household: with a father who died too young and a mother who learned that she had it in her to run a business–and a factory, no less! When our world changed, I was five and Jane was fifteen. The exceptionality of that childhood hit us all in different ways: I was in kindergarten, but she was in early adolescence, a precarious time to lose a father. I knew early on that both my sisters were beautiful, but as an adolescent Jane was something else: she was glamorous. Her appearance was a work of art. So was her handwriting, and so were her painting, and her greeting cards, and her jewelry.

So was her cooking. She was the first person I knew who thought of cooking as an art. Jane was a “foodie” before that term was invented. I can still smell the first dish that announced it. She was probably in her early twenties when she made something called “Shrimp de Jonghe.” It was seasoned with garlic—a substance for which our mother never seems to have developed a taste, despite her marriage to our Italian father. But even more exotic, it was made with wine. I had heard of wine, of course, and I knew that people drank it; but it had never occurred to me that anyone could use it in food. This was clearly the food of the gods, and I didn’t know that mortals could eat it and survive.

Before and between her husbands, she attracted an interesting series of boyfriends, and I was fascinated by them, always wondering what was wrong with the ones I liked. But like the gambler she was, she kept playing the slots, and eventually she hit her jackpot in Johnny.

By the time I met him, John was already her husband. When I asked our mother about the name “Gallegos,” with that Hispanic pronunciation, she told me that she thought his family was Mexican. When I asked him where in Mexico his family came from, he told me it was New Mexico, which was less exotic and a bit disappointing. She and John were such a pair: him so quiet and tolerant, her so bossy, both of them so fond of travel. I am so glad that they found their way to each other and had so many good years together.

The death of a sibling is unlike other losses. Siblings are the people in your life most like you, and by nature and nurture, their lives are uniquely linked to yours. When your sibling dies, a little bit of you dies too.

Over these last few weeks I’ve thought about Our Town, the best-known play of the American playwright Thornton Wilder. Jane shared our mother’s love of theater, so perhaps it’s fitting here that I quote a few lines from it.

We are here today to honor something eternal about Jane Gallegos: her spirit, her personality, her courage, her independence.

Emily Webb, the main female character in Our Town, falls in love, gets married, and dies in childbirth. And then she has an opportunity to revisit her twelfth birthday. It’s a pretty ordinary day–no party, simple gifts, no crowds–and yet she finds that it arouses powerful emotions. Watching her family members go about their everyday business, Emily says,

“I can’t bear it. They’re so young and beautiful. Why did they ever have to get old? Mama, I’m here. I’m grown up. I love you all, everything.– I can’t look at everything hard enough. . . . Oh, Mama, just look at me one minute as though you really saw me. . . . Just for a moment now we’re all together. Mama, just for a moment we’re happy. Let’s look at one another.”

After watching herself and her family for a bit longer, finally she says,

“I can’t. I can’t go on. It goes so fast. We don’t have time to look at one another. I didn’t realize. So all that was going on and we never noticed. . . . Oh, earth, you’re too wonderful for anybody to realize you.”

Abruptly, through her tears, she asks the Stage Manager: “Do any human beings ever realize life while they live it?– every, every minute?”

And the Stage Manager answers, “No. The saints and poets, maybe–they do some.”

Jane tried to do that, I think: to realize life, every minute. We are all called, in our own ways, to be saints or poets. I think our task, as people who knew and loved this complicated, remarkable, infuriating woman, is to realize life while we live it, and to value the people in our lives while they’re there to be valued.

And that’s how I’m going to try to honor Jane’s memory.