These days Republican candidates are under a lot of pressure to establish that they are True Conservatives, and  that means embracing school choice, low taxes, and business interests. But it hasn’t been that long since the state’s largest teachers’ union endorsed Republican Mary Taylor for State Representative in 2004. 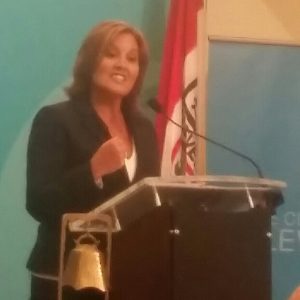 Now she’s Ohio’s Lieutenant Governor, and she is running to succeed term-limited John Kasich as Ohio’s next Governor in the 2018 election.

So it was natural that I wanted to see her “Meet the Candidates” appearance on July 7 at The City Club of Cleveland. As most of my readers and friends know, I am pretty much a single-issue voter. It’s not that I don’t care about other issues, but I know more and care more about education than any of the other topics. (And it’s pretty much the only topic on which people ever ask for my opinion.)

Taylor identifies as a conservative, but on education she downplays ideology. She affirmed her support for school choice, but she also pointed out the need for charter school accountability. Perhaps more important, she recognizes that charter schools were originally envisioned as laboratories to try out education innovations–not just to provide competition for the public schools. She wants to bridge what she sees as an excessively sharp division in K-12 education between college prep and career training tracks.

You can hear or see the whole session on The City Club’s website; or you can focus on what she said about education. Here are points I identified from the audio podcast: you can hear all three in less than five minutes.

All three comments are important to understanding her stance on education, and you can listen and draw your own conclusions.

Four Republicans are running already for Governor, and it’s likely that one of them will represent their party in the fall 2018 election. Even Democrats like me need to pay attention to their positions. I plan to ask my question to as many of the candidates as possible, and I’ll report my impressions here.