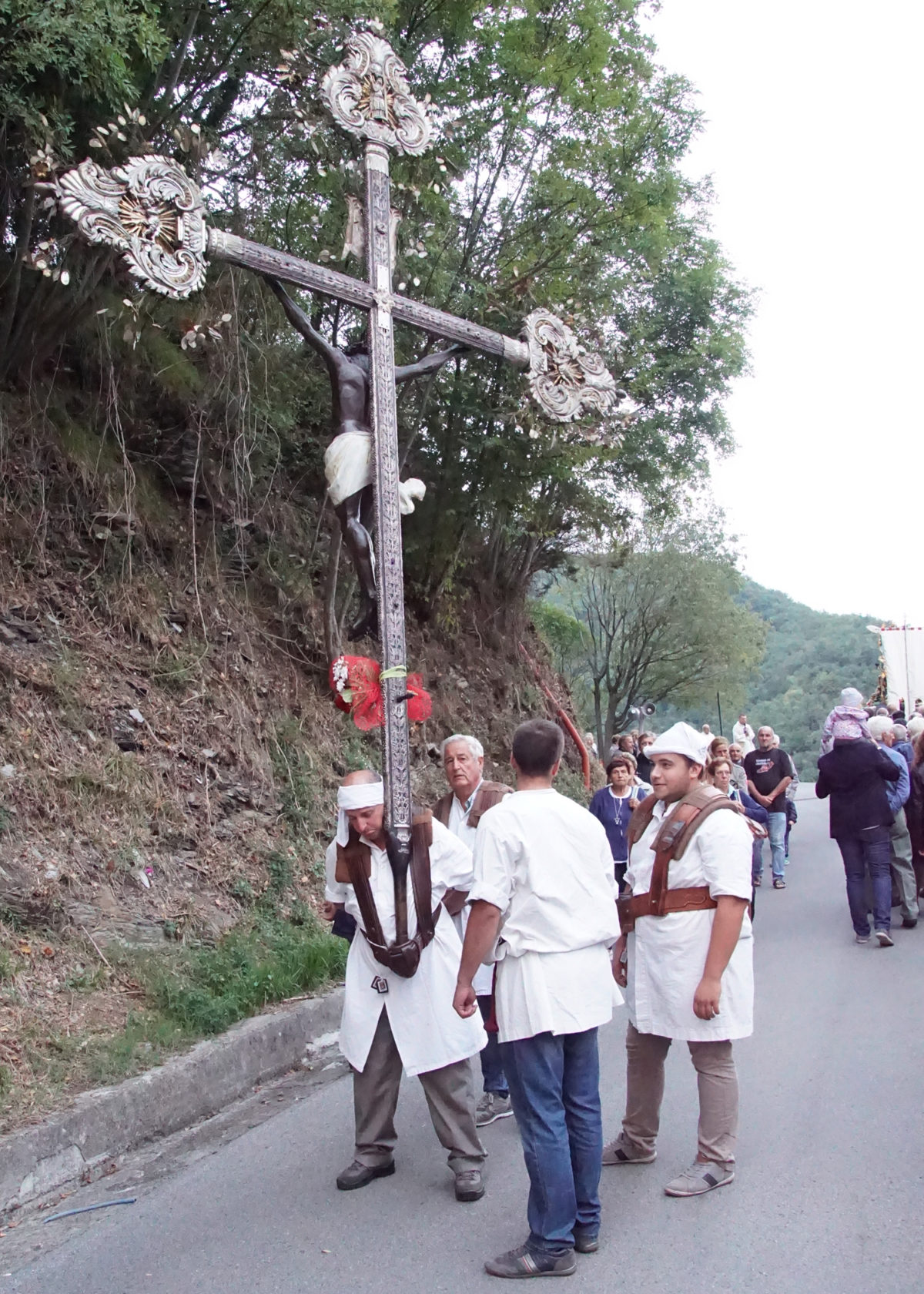 As I’ve mentioned, Soglio itself is pretty small, but it seemed big tonight. Tonight it seemed that the entire valley came together to celebrate the Feast of Saints Michael, Gabriel, and Raphael. As well they should: the bells and carrillon of San Michele di Soglio have been calling them for days!

The official celebration started with mass at 6:00 PM, but our street was crowded well before that. Extra chairs had been put up in the church. I would estimate that it could seat almost 80 people for the mass, and it was standing room only by 5:55. Most of the crowd, including most of our party, were listening in from outside the church. Judy and I braved the church and participated as well as our meager Italian would permit; I was able to bring up the readings in English on my phone, and that helped us to follow along. My fellow Catholic music ministers will be interested to know that the Gospel Acclamation was Christopher Walker’s “Celtic Alleluia”!

The procession is actually incorporated in the mass: it takes place after Communion and before the final dismissal. The litter carrying the statue of Michael, the smaller crucifix that leads the procession at mass, uniformed Genovan police, and an enormous processional crucifix all lead the crowd a hundred meters or so up to the stairs that lead to the parish cimetario, where some prayers for the departed are said. Then the procession comes back to the church for the closing rites, including the final blessing. And then it’s time for a party!

The party goes on for about two hours, with food, drink, music, and dancing. The Orero mayor is there, along with participants from the other parrochiali. It reminds me a bit of the Memorial Day parade and celebration in Bedford: everybody with a connection to the town, however remote, is welcome. Judy, Lew, and John joined the local volunteers serving the crowd, which I would estimate at two to three hundred. During the party our landlord introduced me to local resident and possible relative Giovanni Lavezzo, and we made a connection that will, we hope, include more contacts down the road.

Earlier in the day we spent some time doing family research, while Rob and Elizabeth took advantage of the opportunity to visit Rapallo, Chiavari, and the seacoast. Our little group breaks up tomorrow: Rob and Elizabeth continue their vacation in Pisa, Florence, and Venice, while the rest of us leave northern Italy on the ten-hour drive to Matera.

Today’s photo: Since I showed Romaggi’s San Michele yesterday, I thought it would be repetitive to show Soglio’s today; but I thought that this photo of the team of crucifix-bearers would be interesting. Several of the men have leather gear to hold the base of the crucifix, and they transfer it as needed from one to another. It’s regarded as bad form for the bearer to use his hands to steady the crucifix, and instead they rely on strength, balance, and skill to keep it balanced. (And the rest of the team is there to help if it needs to be pushed upright.)

One thought on “And Now, the Feast!”