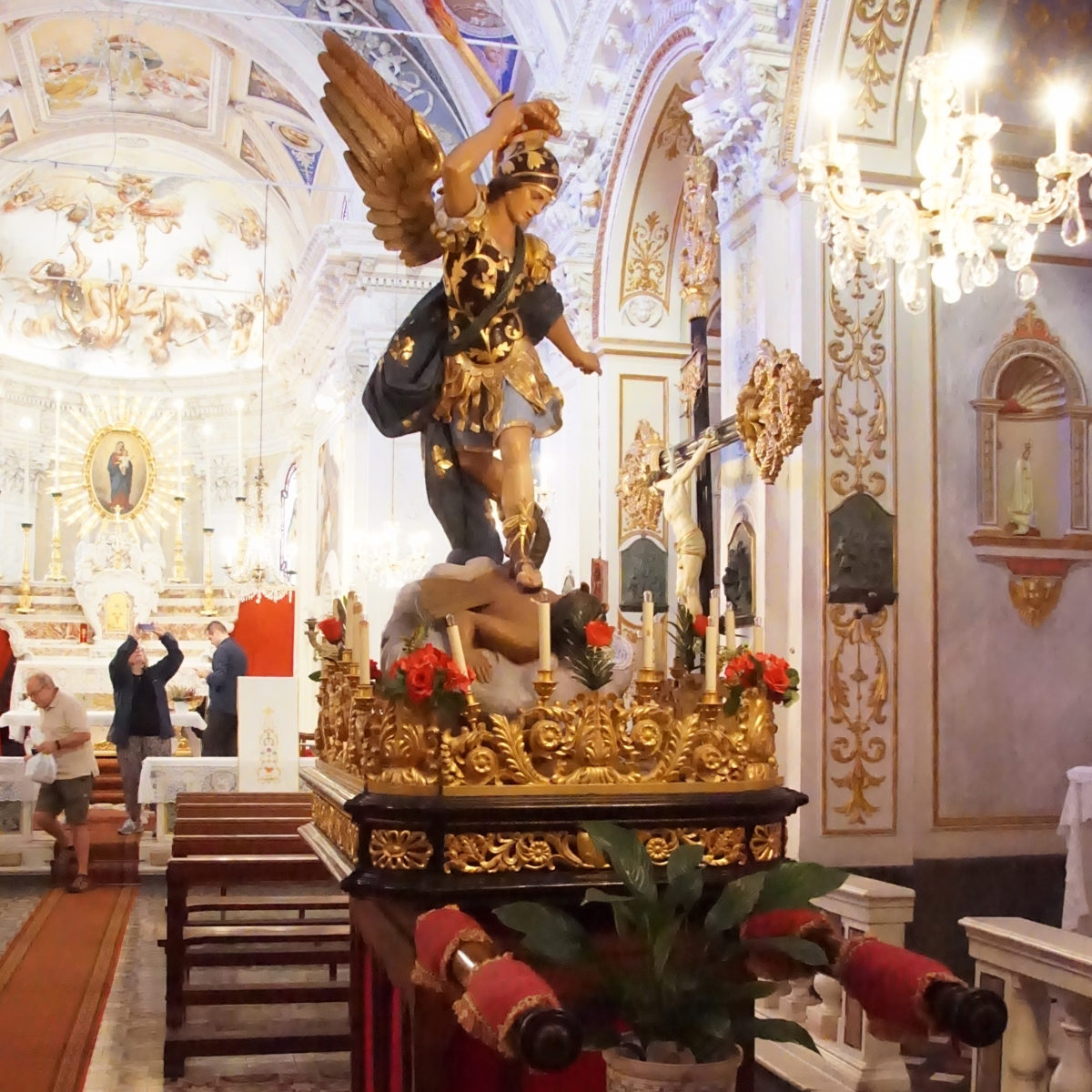 As I’ve mentioned, we’re staying at an inn located right next to the church where our great-great grandfather, Costantino, was baptized.

About Costantino’s name: first, yes, his first name lacks the “n” you see in the more frequently-used “Constantine”; and yes, his surname was Lavezzo, not Lavezzi. Back then, spellings of names were pretty fluid and subject to local dialects, and it’s clear that they were using “Lavezzo” before “Lavezzi.” In fact, Costantino’s parents were both surnamed Lavezzo!

Anyway, tomorrow we’ll attend the festa at Costantino’s church; but his bride Maria Raggio, our great-great grandmother, hailed from the frazione of Romaggi, which gets its name from its once having been a Roman outpost. So today we crossed the valley to her church, where she and Costantino were married in 1840.

Both Soglio and Romaggi are pretty small; one website gives Soglio’s population as 58, and another gives Romaggi’s as 34. Not surprisingly, her parrochiale is a bit smaller than the church in Soglio, but it’s been fixed up recently with the help of an American donor and plenty of local participants. I’ve selected its santo of Saint Michael as my picture for the day.

We had just eaten a marvelous lunch at Osteria U Pellegrin (an osteria is a tavern) when we walked over the church next door. These churches share pastors: theirs is shared between this parrochiale, the one in Soglio, and three others. Most of the churches are locked except when being used for services, and we were contenting ourselves with a look at the outside when a gentlemen came out of a house next door, waved some keys, and asked us if we’d like to go inside. Of course we did! He turned out to be the custodian of the church, and we looked around to our hearts’ content.

The custodian’s name is Enrico Romaggi. His surname is the same as the name of the frazione, which is not uncommon here. And since we have Romaggis in our family tree, there’s a good chance we’re distantly related! What were the chances?

We spent the rest of the day exploring both sides of the valley on foot. Both sides of the valley have ruins. Those nearer to us are actually in an even smaller place up the mountain called Costa di Soglio, which evidently has just nine residents. Soglio–where we are staying–is at an elevation of about 200 meters; Costa di Soglio sits at an elevation of 600 meters, so it’s a strenuous hike. The place has a lot of abandoned homes dating back two centuries, occupied until the fifties or sixties. Romaggi has similar ruins, except theirs are built on Roman foundations.

Tomorrow, the festa. Time to rest up!

Today’s picture is a photo of a recently-restored santo of St. Michael from the church in Romaggi. Michael’s foot is on Satan, whom he defeats in the Book of Revelation; and the whole scene sits on a litter used to carry it in processions. Evidently it’s heavy: eight men carry it on their shoulders.

One thought on “The Other Side of the Valley”