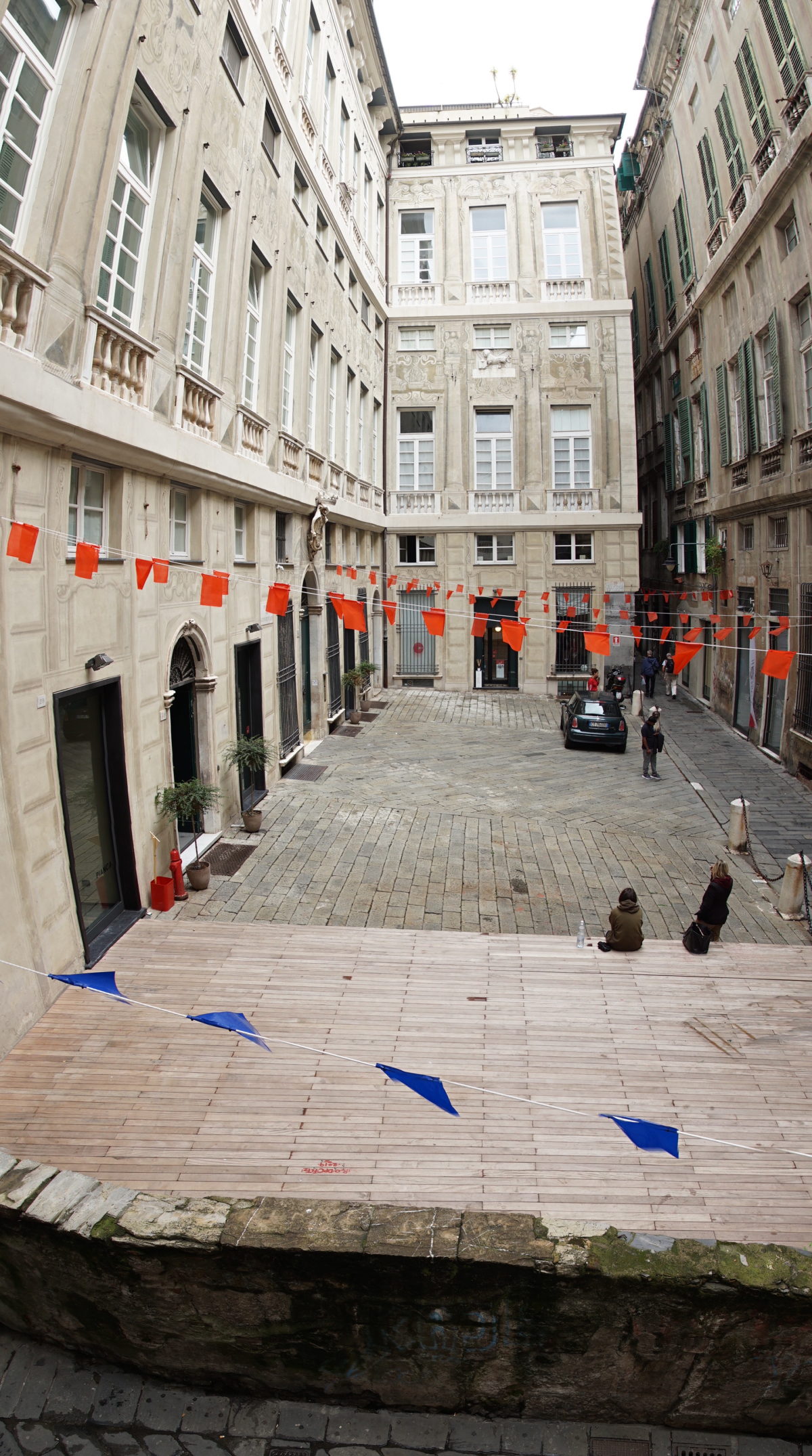 Have you ever wanted to stay in a palace? Well, that’s what we’re doing tonight. Back to that a bit later, after I provide an update on today’s adventures.

I posted yesterday’s entry just before midnight local time, as Judy, Lew, and Elaine were en route to Venice from Barcelona, and the hope was that they would be able to get from Venice to Milan sometime before morning. And they did, just: about 4:30 AM local time. I had made arrangements to let them into the locked hotel and let them sleep in my room. So the four of us found places to sleep for several hours, right through the hotel’s included breakfast, until it was time–past time, actually–to check out of my room and get on our way to Genoa.

We loaded our luggages into the car Lew had picked up, grabbed a quick but delicious brunch at a nearby pastry shop, the Pasticceria Tantazione Siciliani (Sicilian Pastry Temptations), and then headed south to Genoa, about a two-hour drive. Parking in Genoa is very scarce, so Lew needed to find the place where he had arranged to park the car (within walking distance of our lodging). While he parked the car, Elaine, Judy, and I rolled our bags in the rain through the streets and alleys of downtown Genoa looking for our palace. (More on that later.)

Of course, we wandered about twice as much as we needed to. Phone touchscreens don’t work well with wet screens, and GPS doesn’t work well in a maze of ancient twelve-foot-wide streets. After a while, Judy explored Via Giustiniani as Elaine walked up Via Chiabrera while I stayed at the corner to keep visual contact with both of them. Judy and I were talking as she was about 10 meters away, when suddenly a door opened next to her and Rob and Elizabeth walked out to greet her! I called to Elaine, who rejoined us. Rob and Elizabeth had arrived from Berlin, found the place, and used the entry code to get inside out of the rain, and they had heard Judy’s voice outside the door! In perhaps another half-hour, Lew joined us after his parking expedition.

So, about this palace: We are staying in the Palazzo Giustiniani Franzoni, a 16th-century palace originally built by one Vincenzo Giustiniani, a Dominican who became a cardinal in 1570. The place is marketed as an “Apartment inside History,” and that’s pretty much what it is. We have a suite of four rooms with a kitchen, dining room, and bathroom. Everything is functionally modern, but it’s impossible to miss the fact that you’re staying in a 500-year-old building! We’re staying on a second floor that was installed about eight feet below the original vaulted ceiling.

We unpacked, made tea made on the IKEA induction range, and rested a bit. About 8:00 we headed out to dinner, and then wandered the streets of old Genoa, still very busy in the drizzle–restaurants and bars still open–and gave Rob and Elizabeth their first look at Vico Lavezzi, the Palazzo Ducale, and Cathedral San Lorenzo. Lew also found a gelateria (open until midnight!), so Rob, Elizabeth, and I had our first gelato of the trip before returning to our apartment, about 11:00.

And that’s where I’ll leave it for tonight. We still don’t have all of our group: John won’t get here from Barcelona until Tuesday. But the other six of us have enjoyed starting this sharing of the Lavezzi past. Tomorrow we hope for better weather and a chance to explore more.

About today’s photo: This is the view of the courtyard (Piazza Giustiniani) below my bedroom window.