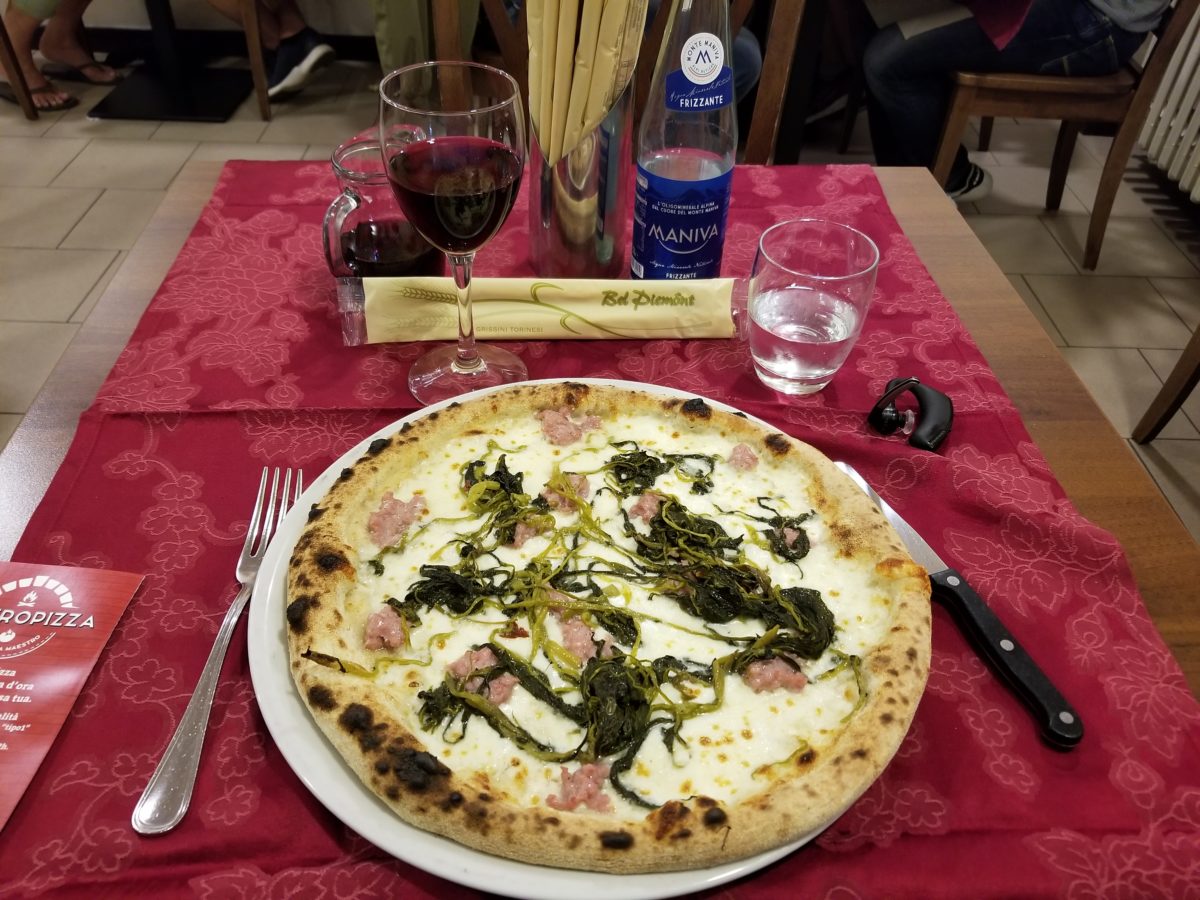 I am writing this from my room at the Ascot Lodging Hotel, 2 kilometers from Milan’s Malpensa Airport. I arrived in Milan about 8:15 this morning–my flight had been delayed a bit leaving New York’s JFK–and killed a few hours at the airport until the hotel’s check-in time.

The most beautiful sight of the day was one I couldn’t photograph without shoving aside the passenger in the window seat next to me: as we approached Milan with the Alps on our left, we flew above a solid cloud deck, with Alpine mountain peaks sticking up out of that white floor in the early-morning light . Extraordinarily beautiful!

The plan was for me to welcome Judy, Lew, John, and Elaine to Milan, but it didn’t quite work out that way.

And that’s where the “third city” comes in. Vueling, their scheduled Barcelona-to-Milan airline, canceled their flight abruptly this morning, and put them on a flight to Venice instead. As I write this, they are in the air on their way to Venice, and then the question is how they will get from there to here. There are rumors of a bus, which would get them here sometime tomorrow afternoon; it’s a three-hour drive.

Except that “they” has now become three rather than four. John’s pocket was picked yesterday on a Barcelona subway. Thieves got credit cards, cash, and–perhaps most disruptive–his passport. Without a passport he can’t fly, and the US Consulate doesn’t open again until Monday. So, as I understand it, he’s staying on in Barcelona while Judy, Lew, and Elaine come to Milan.

There is wonderful stuff to experience in Milan, but our stop here was always intended primarily as an opportunity to assemble before going on to Genoa and the northern villages. So I spent a couple of hours napping, a couple getting caught up with all this funny business, and then went out in search of a meal . . .

. . . which I found when I walked to El Quinto Elemento (“The Fifth Element”), a pizza place (I know, how cliché) about a kilometer from the hotel. You see my delicious meal above. And now I’m writing while I stay by my phone for news. To riff on an old joke, usually the readers digest, but this time the writer digests.

Will we spend a second night in Milan? Will Rob and Elizabeth beat us to Genoa and have a night there on their own? When will John have his documentary status restored? And where will he rejoin us? We’ll all just have to wait and see.

Today’s photo: food, of course. This was my table at Il Quinto Elemento tonight. Standard items in Italian restaurants: vino di casa (house wine, red–rosso–this time) and bottled acqua frizzante (carbonated, “with gas”) or naturale (still, “no gas”). I like frizzante. Pizza, too, comes in white and red varieties. Mine was a pizza bianca with sausage and friarielli–broccolini rabe, or rapini. Don’t be hating on the size: here, that’s a regular pizza for one. The long, thin packages are crispy bread sticks. There’s a bluetooth earpiece on the table, but that wasn’t on the menu.