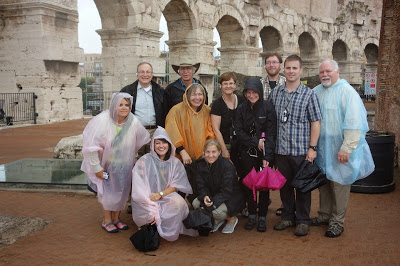 The convent where we are staying is in the Borgo Santo Spirito. A “borgo” appears to be a very small village, and this one seems to consist of two parts: a hospital and the convent of the Sisters of the Sorrowful Mother, where we are staying. If I understand the relationship correctly, we are on Vatican property outside the actual walls of Vatican City. When we walk out the door, we are a few yards from St. Peter’s Square.
Several of us walked over to St. Peter’s for morning Mass. There must be dozens of side altars, and on the hour dozens of priests fan out to say Mass at them. Congregations vary in size from zero to a few dozen, and the languages vary as well. Several of us joined an elderly priest for the “Daily Mass for World Peace” in Italian; John’s daughter Lauren found an English-language Mass. Afterwards, we strolled around St. Peter’s, which at this time had many sections roped off. Most of the ropes would come off for tomorrow’s tours; today gave us a preview of what we would see tomorrow.
Today’s tour covered the Roman Forum on Palatine Hill and the Colosseum. For me, the Forum was too much too fast, but that’s probably unavoidable: I hadn’t done any preparation for the tour, and so from the beginning it was hard to connect the parts together. And parts there were: our tour guide Maria took us up and down more steps than we could count. I first encountered the story of Julius Caesar’s assassination as a kid, probably from Classics Illustrated comic books; and now, many years later, it was pretty neat standing in the very spot where all those events took place.
From there we went to the Colosseum. I was surprised to hear that modern scholars think that the Colosseum was used more for sports and spectacles than for the torture and killing of Christians. We took the underground tour, which offers the opportunity to walk in some of the spaces underneath the Colosseum floor. There are no “locker rooms” here for gladiators: instead, they came in from offsite training rooms through an underground passage, and were probably issued their weapons just before their contest. The whole area under the floor is honeycombed with passageways, and the current thinking is that the passageways held elevators that could deliver gladiators, animals, etc., to specific parts of the floor. As a former drama teacher, I could appreciate the technology.
This was a rainy day, and we were constantly surrounded by men trying to sell us ponchos and umbrellas. We resisted the temptation at first–most of us had hats or umbrellas–but eventually it became clear that we were going to need a bit more protection. The pictures will show several of us in (insert irony here) lovely fashion-forward plastic ponchos.

After dinner and a gelato, we found ourselves in what is sometimes called the Heart of Rome, which is about two miles from Vatican City. Some in our group walked back, but after walking all over the Capitoline hill and from the bottom to the top of the Colosseum, I was among those ready to take a bus back to the Vatican. There was the usual chat in room 201 at the convent, and then we were all ready to head to bed, because tomorrow’s tour starts at the Vatican Museum at 8:15.
Buonanotte from Roma!