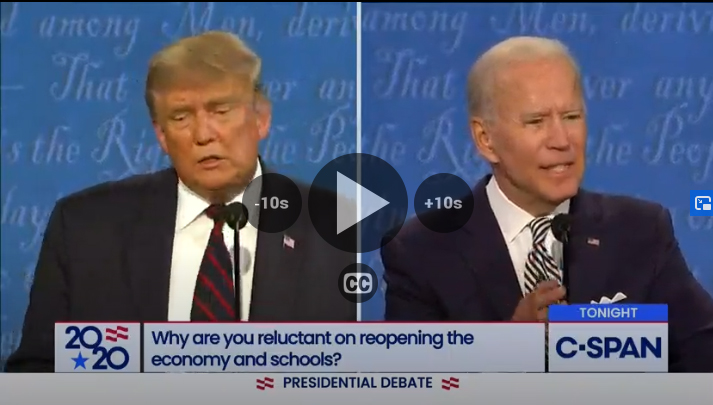 One candidate came to debate. The other came to disrupt.

I don’t have much interest in political labels: to me, they are points of the political compass and that’s about all. And although I do claim a political party, I no longer have an official role in that party. The parties have become political tribes.

The debate didn’t provide voters with information about issues: the positions of the candidates are not one iota clearer today than they were before the debate.

What the debate did do is to provide voters with a clear view of the characters of the candidates. One candidate displayed a pathological lack of self-control. He victimized the other candidate, the moderator, and the viewers by refusing to participate in dialogue: by introducing irrelevant topics, by interrupting, and by refusing to follow norms of conversation, he thwarted any real exchange of information and examination of positions.

There may be voters who view the President’s tactics as effective verbal aggression. Many of them regard this verbal cage match as terrific TV, great political blood sport. I’m not one of them.

I’ve debated. It’s tough. You need to exercise your intellect and control your emotions. If you have a weakness, debate will exposes it. And this one exposed the weaknesses of both candidates. The American people can now decide which set of weaknesses is more important.

Joe Biden had a hard time dealing with the constant interruptions: so would most of us. With the constant flurries of unsupported allegations, irrelevant points, and personal attacks, there were times when I thought he should have said something different. But I wasn’t there, and it’s easy for an observer to think of things the participant should have done.

Meanwhile, #45 revealed something much more dangerous: an utter lack of self-control.

My point isn’t that #45’s behavior was immoral, or unkind, or impolite. My point is that it was revealing.

Leadership demands self-control. Without it, leadership is reduced to pandering, preening, or bullying. The President’s blustering and jabbering last night reflects much more than a tactic or a personality trait: it’s a character flaw, and it’s far more dangerous than Biden’s difficulty in managing it.

The guy who couldn’t shut up, concentrate, and formulate a coherent response to his opponent–what debaters do all the time–is the same guy we send to meet with world leaders, to control our nuclear weapons, to command our military, and to administer the government.

The most important learning, thanks to last night’s debate: we know now that the leader of the free world can’t even lead himself.