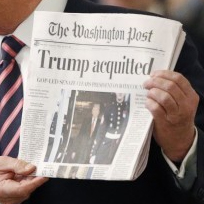 I wrote the following article in February 2020; obviously, it was much more timely then. I delayed posting while I proofread, and as the weeks went by I thought about let it join my many pages of unposted posts. But more recently (as you’ll read in subsequent posts), I have become convinced of the importance of recording my thoughts in these turbulent times. So, timely or not, here’s what I wrote last winter about the impeachment process. I still think I was right.

Some musings about the impeachment and trial process.

First: It’s pretty clear that the conduct of POTUS 45 was corrupt. County commissioners, corporate buyers, and school district business managers have gone to jail for soliciting favors, and the forced investigation of a political rival is a favor. If the House–the only body that could bring charges–had failed to take action, every President in the future could do the same thing with impunity. Even if the Senate failed to do its job, at least the House did.

Finally: Now the American people get to decide who gets rewarded and who gets punished. And we, our children, and their children will live with the consequences.