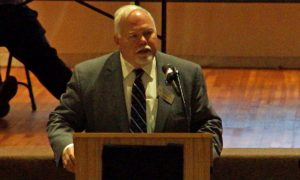 “The ‘Most Important County in American Politics’ has the opportunity to send someone to Columbus who will responsibly occupy this seat AND provide the leadership that the State Board of Education needs.”

Our campaign to send a strong leader to the State Board of Education’s District 11 seat enters a new phase now, after the Cuyahoga County Democratic Party Executive Committee voted today to give its endorsement to one of the other candidates.

So many things went right: the hundreds of phone calls made by our Campaign Committee, the letters sent to each of the 497 Executive Committee members, the volunteers who showed up early and greeted the XC members as they arrived, the conversations that Campaign Manager Andy Mizsak and I had with participants before the meeting. In the end, we had everything we needed – except the votes.

The need to elect the right person continues. The Democratic Party brags about the importance of Cuyahoga in delivering critical votes to Democratic candidates. As I told the Executive Committee, “The ‘Most Important County in American Politics’ has the opportunity to send someone to Columbus who will responsibly occupy this seat AND provide the leadership that the State Board of Education needs.” Today, they opted not to do that.

There’s no denying that the race would become much easier if we had won this endorsement: the Democratic Party provides resources and access along with its brand, and those advantages will now go to someone else.

Immediately after the vote, supporters began encouraging me to stay in the fight, and that’s what I’ll be doing. I’ll take a day off from the campaign tomorrow, and early next week we’ll request a breakdown of the ward and city votes. Once we have that, we can start analyzing it to see where we can do better; and we’ll start working on a strategy that doesn’t rely on help from the CCDP in this nonpartisan race.