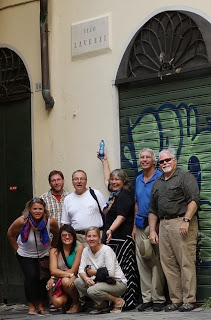 Comparing cities is a dangerous pastime for the occasional traveler, but making comparisons is unavoidable. Genoa doesn’t have the ancient component that Rome has: Liguria, the region that Genoa dominates, was a Roman outpost back in the ancient times. And although it has the familiar concentration of churches that we’ve come to associate with old Italian cities, it’s not the religious center that Rome is. In fact, it’s not really a center for art for art’s sake: most of the art we saw was architectural, or decoration of architecture, or recognition of important figures in the city’s history. Genoa is a port city that made its wealth by trading; so the art follows function here.
Liguria is a banana-shaped region of Italy that follows the curve of Italy’s northwestern coast. It includes Cinque Terre and Portofino on the Italian Riviera. But Genoa was once an independent republic, back before the unification of Italy, and so it has its own history as an independent nation.

When people say that Christopher Columbus was Genovese, it’s unclear what they mean. He is claimed by everyone here, it seems. The city of Genoa is happy to claim him, but so does Piacenza to the north, and Bettola has a statue of him in the town square we visited the other day. All of these places were at one time or another part of the state of Genoa, although they’re not part of the modern region called Genoa; so saying he was Genovese is pretty broad.

Someone told me once that Genoa was so hilly that it made San Francisco look like Chicago, and there’s some truth to that. High above the city is an old fort, and although it’s possible to climb it on foot, it would take some time. The streets that climb the hills in town are laid out as switchbacks, much like roads in the mountains; so to move a few hundred surface feet, you might have to walk a half mile. Genoa Transit has solved that problem by laying out several funicular railways, which sometimes run on the surface and sometimes pass through shafts cut through the hills. They are like subway cars supported horizontally on an angled wheel carriage that follows the incline of the track. We took one of those to get near an old fort, and then Judy, Kelley, and Noël stayed in that area while Lew, John, Lauren, Bill, and I walked to the castle on foot.
From there we went to the Palazzo Ducali, or Ducal Palace, which was the seat of government during the Genoan Republic. The word “Duke” is frequently used to describe the rulers of Genoa, but the actual title was “Doge,” which basically meant “leader.” The Doge was the head of a Republic, not the kind of aristocrat that the work “duke” implies. Dukes get to be dukes by having a fealty relationship with a king. The doges of Genoa weren’t subordinate to anyone except their own people. They had a nice palazzo, though, and in front of it, on Piazza Ducali, we found a market where we were able to find some interesting items for sale. Right around a corner is the Cathedral of San Lorenzo (St. Lawrence is the Patron Saint of Genoa), and the Piazza San Lorenzo had another market where we contributed even more to the local economy.

We had the opportunity also to visit our own alley: the Vico Lavezzi, which Google Maps can find but doesn’t label online. One can always hope for a Via or a Piazza, but we get a Vico, which I guess ain’t bad. Corsica used to be owned by Genoa, and there is a group of rocks there called the Lavezzi Islands. We’ve never found out whether there is any relationship between the Lavezzis of Genoa and the Lavezzis of Bettola, but we like to think there is. After all, they have an alley, and an island.

We saw a few beggars on the streets of Genoa, and some independent merchants who set up shop on the pavement; but it was generally a more relaxed atmosphere than we found at Rome, where the merchants frequently became pests. And I would say that Genoa was generally cleaner than Rome.

Before turning in for the night, Noël and I caught up by Facetime with Heather’s kids at Drake’s soccer game at home, and we decided to try again tomorrow.