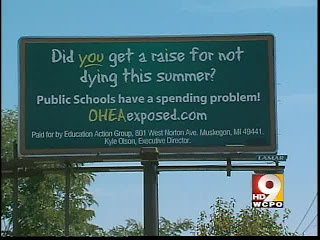 The Michigan-based Education Action Group posts billboards in southwestern Ohio asking, “Did you get a raise for not dying this summer?”
Ohio gubernatorial candidate John Kasich tells an audience, “We need to break the back of organized labor in the schools.”

And now, as governor-elect, Kasich says, “the public-employee unions, particularly the teachers union, you know how I feel about them, . . . but for the unions that make things, I’m going to sit down with them.”

Oprah Winfrey lends her reputation to the film Waiting for Superman, and provides its producer with a virtual infomercial for charter schools and union-busting.
Have you had enough yet?

But wait, it gets worse: the Republicans aren’t the only party we’ve lost. The Obama administration’s embrace of merit pay, union-busting, and charter schools tells us that a “D” after the official’s name doesn’t reliably label a friend.

Republican and Democratic attitudes toward public education aren’t the same, to be sure; but the nuances of their attitudes toward us are a topic for another day. if the Republicans hate us and the Democrats disrespect us, what does that mean? Are we – gulp – alone?
Yes.
Long before we lost the Republicans and the Democrats, we lost our fellow citizens. We have a big persuasion job to do with society at large: too many think that ripping on public employees in general, and public educators in particular, are fine ideas. We’ve done little to tell them otherwise.
Worse yet, our own members are unreliable supporters of public education. Here’s what I mean.
We are in danger from the new Republican government of Ohio, but not just because they share their party’s loathing of public employees. When they attack us, they’ll be supported by many of our fellow-citizens. And many of own members will be right there with them.
Ho, ho, ho, indeed.