August 2016: Lynn and I at the Cuyahoga County Board of Elections, dropping off my candidacy petitions for State Board of Education. 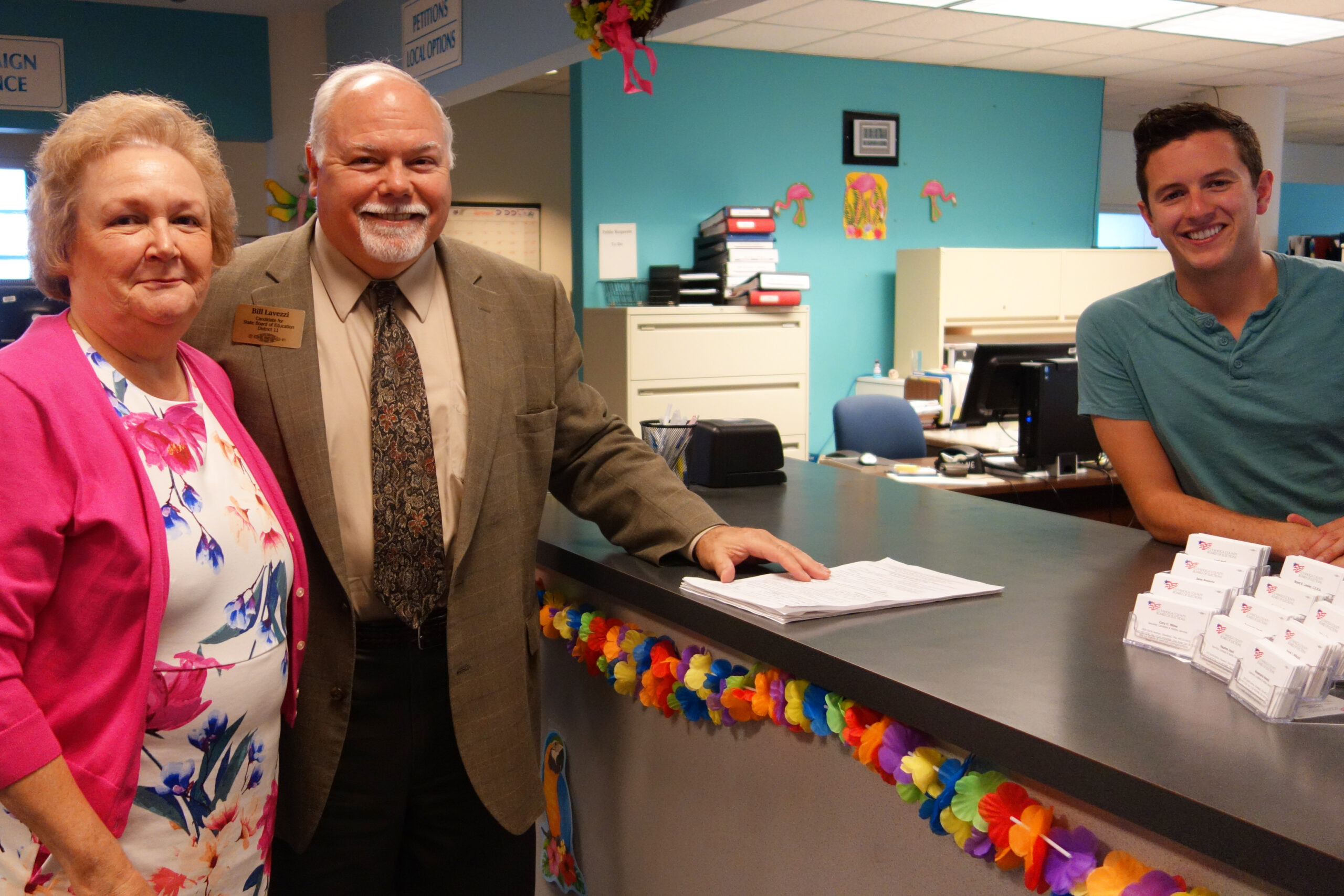 At a time when people are waiting–patiently or not–for election returns from a few key states, this seems a good time to mention election workers.

For several years, our mother was a Republican election judge. Each party had to have three (I think) judges at the polling place. Since this was in Chicago, the Democrats had the only party apparatus in our area, and the task of recruiting the Republican judges fell to Tally Giaccone, the Democratic precinct captain.1 It wasn’t until later, when I began to have my own experiences with elections workers, that I really began to appreciate the work that they do, and how important our bipartisan election system is.

Beyond the people staffing their polling places, few voters ever interact with our elections apparatus and the people who make it work. I’ve had the opportunity, and it has been pretty inspiring.

As near as I can remember, I’ve been on the ballot six times.2 Four of those races were in Democratic primaries, and two were for public office. For all of them, I needed to visit the Cuyahoga County Board of Elections. For one of them, I needed to work with the Secretary of State’s office, which, as the name implies, serves as the main election office for the state.

Back when I was working for NEOEA, I frequently contacted our eleven county boards of elections and the Secretary of State’s office to research school levies, political boundaries, and electoral schedules.

In every case, I have found these folks to be dedicated public servants. They don’t seem to care what party I belong to, and it doesn’t seem to matter what administration is in power: they have been as helpful as could be.

These folks make it their mission to make the system work for all of us. Candidates (most, anyway) are patriots.3 Running for office is hard, and these folks try to make it as positive as it can be. Even when you’re running for a relatively minor position, they give you professional attention and make you feel like your race is the most important one they have to deal with.

In this election year, these folks have gotten a lot of attention; and in some states, they are getting a lot of pressure. They are the unsung heroes of American democracy. Eventually we will get past the present electoral suspense, and one reason will be the dedication of local and state election workers.

Sometimes you hear that there’s a lack of enthusiasm for the candidacy of Joe Biden. Not for me: I’ve been waiting for this opportunity since 2011. That’s the year we met.

To be fair, he probably doesn’t remember me: there were about 10,000 other people in the room, and I never got closer than a hundred feet or so. But it was a memorable experience,1 and I became a Biden fan that day.

Like most Democrats, I admire Barack Obama personally and politically. But just as sometimes a beloved family member disappoints us, I was disappointed with his education policies.2 In 2011, he sent Joe Biden to the NEA Representative Assembly in Chicago on a fence-mending visit, and I thought Biden was terrific.3

You can see some of the reason why in the condensed YouTube video NEA published. I blogged about it at the time in my position at NEOEA. The passion we’ve seen on the campaign trail this year is evident there, along with the commitment to public education.

But what also comes through is this, and I recall it even more strongly from the speech as a whole: Biden spoke of policy issues as disagreements. It didn’t make the recording, but I recall him saying explicitly: the people on the other side believe what they believe. They’re not bad people, they’re just wrong. You can, and should, disagree strongly with your opponents without showing contempt for them. You need to win the argument, not give in or give up.

Most Americans would like to feel like one nation again, but we all know that won’t happen without conscious effort. Honest, passionate disagreement is legitimate, and American. I am enthusiastic for Joe Biden because he understands that. I know, because he told me so nine years ago.

In a recent post I wrote about my curious political history, which incorporates a number of experiences collected in both parties over nearly sixty years.

It would be sad if I hadn’t learned something from those experiences. Fortunately, I have, and I think the lessons are real.

First: Your character is more important than your political beliefs. Everybody has the right to be wrong, at least sometimes. But people with character will take steps to get it right. They’ll acknowledge mistakes. They’ll do their best to correct them.

Second: Intellectual honesty is more important than intelligence. If you’re going to make excuses for the faults of your political allies, or rationalize your support for them, or make a Faustian bargain for a political advantage, acknowledge that you’re doing it. Don’t try to cloak your actions in principles you don’t believe in.

Third: Realism is more important than consistency. John Maynard Keynes is supposed to have said, “When the facts change, I change my mind. What do you do, sir?” There’s question as to whether he said it,1 but whether he did or not, we’ve all known people who disregarded facts to the contrary once they’ve made up their minds. Sometimes, we may have even done that ourselves.

Fourth: Principles are more important than ideology, labels, and parties.

I suggest that we consider what our real principles are, and dedicate ourselves to making those principles come alive in public policy. How?

Over the years, I’ve met patriots, opportunists, crooks, and cowards. I’ve learned something from all of them. Here’s my takeaway.

Sometimes we hear that everything is different now: no one cares; no one is honest; no one does things the right way. I suggest that that’s not true. There have always been people ready to do public service the right way. They were never 100% of the politicians. But they were never 0% of them either. Maybe that percentage today is higher or lower than it once was. But it’s still somewhere between none and all. It will take effort to find out.

But it’s worth it.